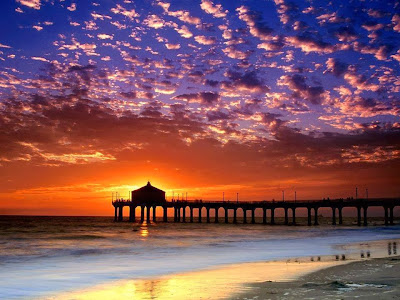 Last evening, Linda was scared out of her wits. But this morning the town appeared peaceful and calm. Read on.

Early next morning, Linda woke to a loud chorus of birds harmonizing outside her bedroom window. Her cats were snuggled at her side. In the light of day, the events of last evening seemed unreal and just a figment of her overactive imagination. She couldn’t believe that Todd and Shana had said all those creepy things yesterday. Even the lingering shadows and the strong gust of wind seemed to be only the result of bad weather and her weird thoughts.
It was a beautiful, windswept morning in early September.
The day began like all the others: she woke early to give herself time to stroll slowly along the beach outside her apartment.
The small town on the coast of Florida woke early with the dawn. Fishermen took out their boats at daybreak in order to bring in their catch before dinner time. People jogged along the beach; some ran with their dogs. She felt the cool breeze curl its fingers around her neck and lift the strands of hair that had escaped her ponytail—feeling like a soft caress. She took the path that ran beside the beach, passing other residents and some tourists, who were strolling by the beach. She wave hello to them. Bob, who lived in the town’s residential area, waved hello to her. He never missed his morning jog. The Green family ran by, all waving wildly; the parents and two daughters were training for the upcoming marathon.
Posted by Susanne Leist at 11:16 AM