I will grow.
I will reach the stars.
I don’t care about the graves
or the mausoleums.
I don’t care that
The Dead
walk the night.
I will grow leaves.
I will stay here.
I will stay alive.
THE DEAD GAME
Kindle
http://amzn.to/1lKvMrP
Nook
http://bit.ly/1lFdqNj
Posted by Susanne Leist at 6:43 PM No comments:

A NEW BEGINNING
The rain hits the puddles
in staccato rhythm.
A constant
and mesmerizing sound.
Tree branches hang low,
weighed down with water.
Flowers lift their shiny faces
for their morning washing.
The cold, crisp rain
refreshes and renews.
The clouds dry out.
The sun returns
to brighten the day.
The air smells clean.
A new day dawns.
A new beginning.
Posted by Susanne Leist at 6:41 PM No comments:

A MAGICAL NIGHT FOR A PARTY

A MAGICAL NIGHT FOR A PARTY
The glass dome reflects the sparkling stars.
Inside, dancing pairs twirl around.
Beneath chandeliers of ice.
Between frozen statues.
Reflecting days gone by.
In mirrors upon the frosted walls.
Spin and dance the night away.
Until the dawn rises clear and strong.
And chases away the dark shadows.
A party at a glass house can be perfect.
Maybe a little too perfect.
THE DEAD GAME
Kindle
http://amzn.to/1lKvMrP
Nook
http://bit.ly/1lFdqNj
Posted by Susanne Leist at 6:39 PM No comments:

RIDE WITH THE WIND

RIDE WITH THE WIND
They ride the night.
The Dead ride with the wind.
Daylight is their enemy;
Darkness their savior.
Lock your doors.
You might be next.
Hide well.
You might become one of them
On this dark night.
THE DEAD GAME
Kindle
http://amzn.to/1lKvMrP
Nook
http://bit.ly/1lFdqNj
Posted by Susanne Leist at 6:37 PM No comments:

HOPES AND DREAMS
Look up at the sky.
Hope for better things.
Pray for your family.
Wish for happiness.
Your hopes and dreams
will lead you in the right direction.
Posted by Susanne Leist at 6:35 PM No comments: End House explodes,
shattering from within.
The house groans
as it topples into the sea.
Leaving no trace behind,
no evidence of its existence,
its wicked mark on mankind.
Gone for good,
or so we hope
and with it,
The Dead.
THE DEAD GAME
http://myBook.to/TheDeadGame
http://bit.ly/1lFdqNj
Posted by Susanne Leist at 9:59 PM No comments: A THANKSGIVING SPIN
Sweet and tasty it may be.
It does not come for free.
Life was given up
For this group to sup.
What are your holiday wishes?
And what could be the side dishes?
Some sliced fingers on a crystal plate
May satisfy your cravings of late.
Enjoy!

Posted by Susanne Leist at 5:24 PM No comments:

A DOOR TO HELL A DOOR TO HELL
Beauty marred by destruction.
An oasis scarred by evil.
Florida promises sunshine.
Oasis delivers death.
Do you still want to visit?
We’ll be waiting.
The Dead Game
Kindle
http://amzn.to/1lKvMrP
Nook
http://bit.ly/1lFdqNj
Posted by Susanne Leist at 5:23 PM No comments:

THE FUTURE FOR OASIS
The crystal ball comes to life.
Flying creatures screech inside.
Dark shadows drift through the darkness.
A noose swings from the gazebo.
A face appears among the swirling mist.
A face all too familiar to the residents.
A dim future waits for them.
A future to be fought and conquered.
THE DEAD GAME
Kindle
http://amzn.to/1lKvMrP
Nook
http://bit.ly/1lFdqNj
Posted by Susanne Leist at 5:21 PM No comments: A walk alone in the dark.
Feel the cold.
Smell the trees.
Hear the snow falling.
Watch the stars sparkle.
Engage all your senses.
No interference.
No voices.
No noises.
Only clean, fresh air.
And you.
Posted by Susanne Leist at 5:19 PM No comments: 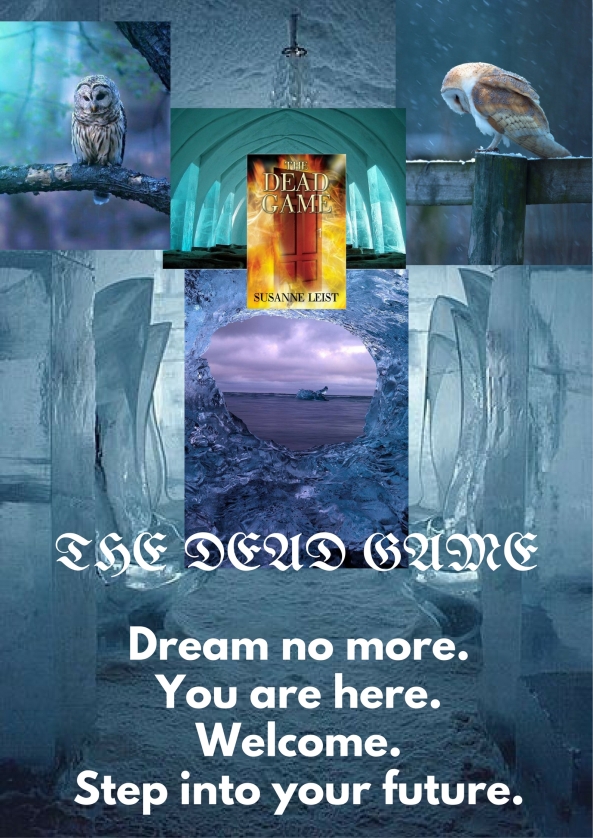 A fantasy is waiting for you.
Just open the door.
Step inside.
The Dead Game
http://myBook.to/TheDeadGame
http://bit.ly/1lFdqNj
Posted by Susanne Leist at 5:17 PM No comments: WHAT THE HELL?
They stepped into a drafty master bedroom,  illuminated by lit candles encircling the canopied bed. The candlelight created shadows that swayed back and forth across the ceiling and walls. Linda felt like the shadows were reaching out for her.  She backed away in horror, not knowing if she was imagining them or not.
She didn’t want to move any closer to the bed, dreading what she might discover there. Anything was possible, from what they had already witnessed in this house. But Todd and Shana kept walking forward.  She moved with them toward the bed.
What she found there exceeded her wildest expectations. On the white quilt lay a human skeleton with its arms resting at its sides. The skeleton began to bleed, slowly at first, and then profusely from the deep gash in its bones from the long, serrated silver knife sticking out of its chest. In the stream of blood were worms—scores of worms—inching out from the deep hole, spreading across the white quilt.
Linda couldn’t believe her eyes. She gasped. More and more worms were climbing out from the body, falling in groups from the bed to land on the carpet.
A new doorway emerged on the far side of the room. Enormous worms spread across the floor, their squishy bodies were blocking the path to the door. They were circling her feet, trying to climb up her shoes. She stomped her feet to dislodge the worms latching onto her heels.
Looking over her shoulder, she saw Shana backing into a corner. Her eyes appeared huge and saucer-like as she stared at the worms crawling closer and closer to her. She wasn’t making a sound, but Linda could hear her shaking—as if her bones were rattling inside her quivering body.
Impatient with both of them, Todd dragged them through the swarms of worms. Once they were outside the room, Linda gave a sigh of relief.  The persistent worms were locked in the bedroom, behind the door that had concealed itself into the wall.
What was next for them in this creepy house?
THE DEAD GAME
http://myBook.to/TheDeadGame
http://bit.ly/1lFdqNj
Posted by Susanne Leist at 5:15 PM No comments:

PARTY WITH THE DEAD Follow me to the clearing,
where the trees part in fear.
The Dead come to play,
and the La Santa Muerte rule.
Bring your sacrifices,
and your wishes will come true.
The female Grim Reaper is all-powerful,
and the taste of blood can be sweet.
She will grant wishes of  revenge and murder
to your bitter heart’s content.
THE DEAD GAME
Kindle
http://amzn.to/1lKvMrP

Nook
http://bit.ly/1lFdqNj
Posted by Susanne Leist at 5:14 PM No comments: