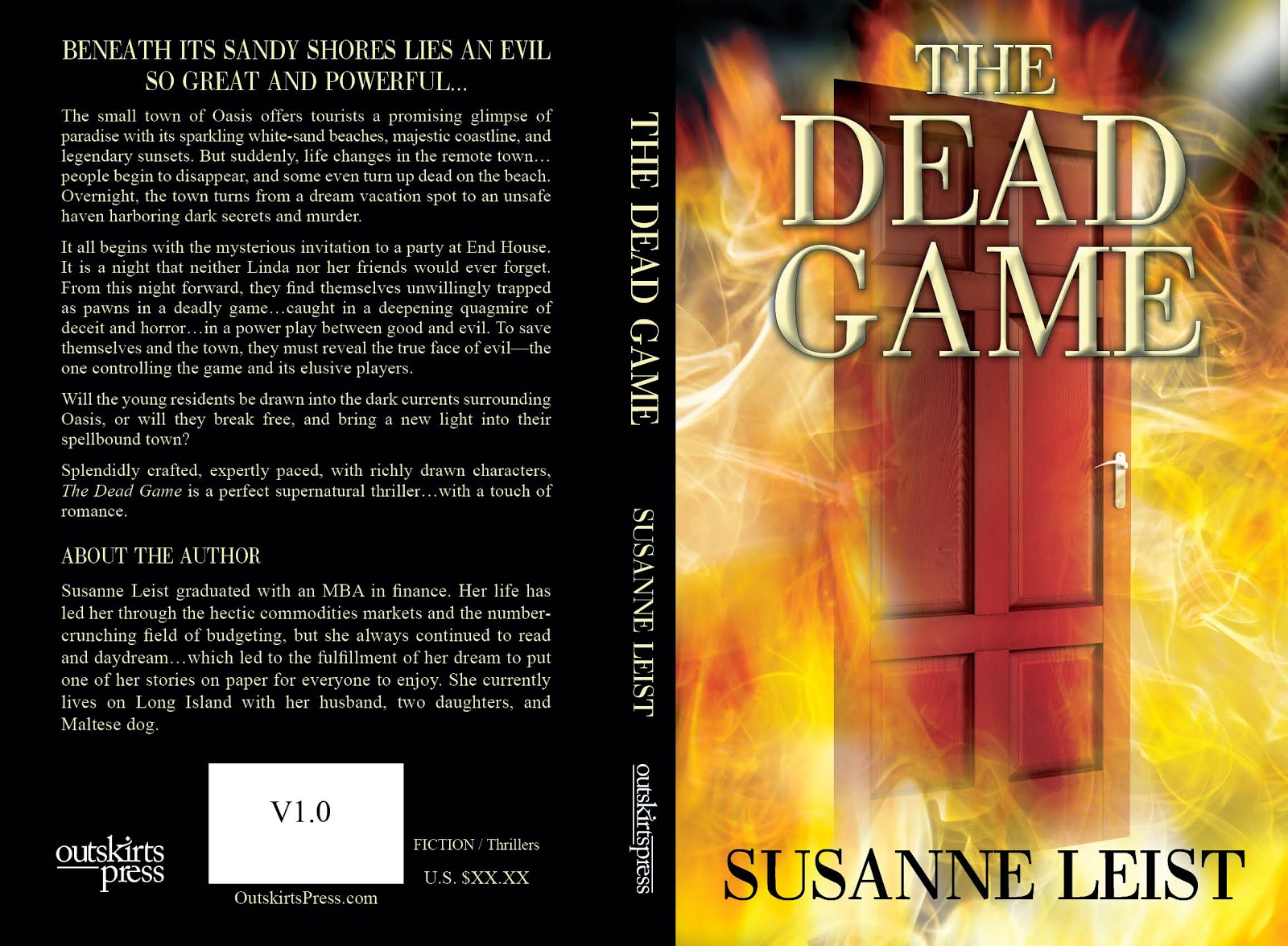 THIS REVIEWER UNDERSTOOD WHAT I WAS GOING FOR IN MY BOOK.
5.0 out of 5 stars You are invited to an evening of intrigue...,

By
Jim Goforth - See all my reviews


This review is from: The Dead Game (Kindle Edition)


Some books take an eternity to get things kick-started, using slow burn tactics to ramp up suspense or develop story lines, some almost to the point where you almost feel like giving up on them with the thought the ultimate payoff is never going to culminate.
Susanne Leist’s debut opus ‘The Dead Game’ is not one of those books.
From the very moment it gets underway, starting off with a sinister, tempestuous and enthralling prologue section which takes place five years prior to the main story, it launches directly into chills and thrills and lays out a wonderfully dark and engaging foundation on which to build all ensuing events.
After these cataclysmic events in the residence known as End House in the seemingly idyllic Florida town of Oasis, the story now begins in earnest from present day revolving around chief character Linda Barnett who has relocated to this very town in a bid to discover a simple, peaceful existence.
For a while, that is exactly what she finds in this apparently ideally named township, but that is all going to change and soon enough it does, with Oasis becoming plagued by a host of strange and mysterious occurrences, deaths that occur once the sun goes down.
The mysterious invitations to a party hosted by unknown persons, received by Linda and her bunch of compatriots are the spurring agent to initiate events where the worried townsfolk embark on a nightmarish expedition to uncover the dark secrets lurking behind the perfect innocuous facade of oasis.
Leist is a great natural storyteller and she exhibits her skills here, weaving a cornucopia of elements into the fabric of the tale, developing a cast of intriguing characters who engage the reader and draw them into their various stories and agendas.
This is a supernatural thriller, predominantly involving things of a vampire nature, but it is far from your standard generic vampire by the numbers piece, it is skilfully crafted to involve romantic overtures along with lashings of action and loads of building suspense, as well as some atmospheric horror, all neatly balanced without sacrificing any of the components.
Rolling along with a suitable undercurrent of menace and portentous threat, The Dead Game keeps things interesting with a host of plot shifts and moments to maintain a strong desire to continue reading and become absorbed in the frightening secrets engulfing those who dwell in Oasis.
For the most part, the characters are extremely well fleshed out, in particular those in main roles such as pivotal soul Linda herself as well as the mysterious and wealthy Todd, the vivacious Shana Logan and the others in the core group of friends, and the author ensures we care about what happens to these folk, though having the knowledge that not all is right at End House means we’re helpless to warn them against having anything to do with it.
Susanne Leist has constructed a thoroughly engrossing debut novel here and those who enjoy atmospheric supernatural thrillers with a taut and deftly written story will find plenty to captivate them here.
Posted by Susanne Leist at 10:51 AM