INTERVIEW WITH UVI POZNANSKY, AUTHOR OF “THE MUSIC OF US” AND OTHER BOOKS

Please welcome Uvi Poznansky who is a diverse and talented author. She has also become a good friend. 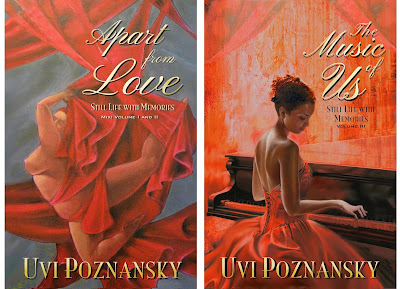 Tell us a little about yourself.


I am an author, poet and artist. I paint with my pen and write with my paintbrush, which means that my art always tells a story, and my writing is highly visual and sensual.  I earned my M.A. in Architecture from Rensselaer Polytechnic Institute and my M.S. degree in Computer Science from the University of Michigan. I write across a variety of genres: literary fiction, historical fiction, biblical fiction, dark fantasy, poetry, and children’s books.


Tell us about your new series, Still Life with Memories.


In my debut novel Apart from Love, I described a son, Ben, who comes back home, rebels against his father, and reveals a family secret: his mother, Natasha, previously a renown pianist, had succumbed to Early-Onset Alzheimer. My new novel, The Music of Us, takes Natasha a generation back, to the beginning of WWII, when she falls in love with her future husband, Lenny.

The story is told by Lenny. In 1970, he can no longer deny that his wife is undergoing a profound change. Despite her relatively young age, her mind succumbs to forgetfulness. Now, he goes as far back as the moment he met Natasha, when he was a soldier and she—a star, brilliant yet illusive. Natasha was a riddle to him then, and to this day, with all the changes she has gone through, she still is.


Do you break the rules when you write?


I sure do! You know how you’re taught to write languages that are not too long, so the reader doesn’t get lost in them? Well, that’s not always the way we talk. Some people just string one sentence into another, creating free associations without putting a period in between, barely taking time to breathe. This is what I am exploring with Natasha, who at this point in the story is a vibrant teenager who has more to say than time to say it:


I asked Natasha if she got my photograph, the one I had sent earlier that month. It showed me among others in a group of Marines, all of us dressed in uniforms, looking exactly alike.

She said yes, and was I the Marine second from the left, squatting, and in return I should expect a photograph of hers, which I’d better treat with extreme care, not the way I had treated her first envelope, which meant placing it in a dry, safe place, preferably close to my heart, because this is the earliest picture she had with her papa, so it was dear to her, and she’s giving it to me as a special gift, and on an entirely different note, what would I say if she told me that this summer she plans to take some time off from performances, which would give us an opportunity to meet, and even if her Mama would object to this idea, because she protects her only daughter from dates with men, and with soldiers in particular, because in her opinion they’re good-for-nothing low-lives who sleep who-knows-where with God-knows-who, she, Natasha, would love to see me if—and that’s a big if—I could arrange a visit.


Give us another example of breaking the rules using sentences that go on for the duration of a full paragraph.


Sure! Here is another example, with old Uncle Shmeel who is an old bachelor so eager for a conversation that he can’t stop talking:


I raised my hand for a farewell handshake, as I had to catch the last train out of town, but according to Uncle Shmeel, the conversation had only begun, so why rush it?

And without losing a beat he started telling me, between one momentous blow and another, that thirty years after it was written, this rhythm was used for the letter V in Morse code, and therefore it would surely come to represent the notion of victory, thanks in part to the BBC, because since the beginning of this war it had started to preface its broadcasts with those four notes, played on drums, but if you would ask him—which for some reason, no one cared to do—he could give it more punch, not only because the clarinet had the largest ranges of pitch of all musical instruments but also because no other Kleismer could hope to come close to the way he played it, which might sound like bragging but really, it wasn’t.
You can hear it for yourself, can’t you? Dit-dit-dit-dah!

At this point Uncle Shmeel smoothed his hair over his bald spot and took a long, deep breath, which allowed him to go on explaining that at any rate, this new interpretation of the symphony would have surprised the composer himself, as did the other, more common interpretation, which was based on the rumor that he, Beethoven, had pointed to the beginning of the first movement and said, “Thus fate knocks at the door.”

Fascinating as that might have sounded it was completely wrong, nothing more than a fancy myth, but no one but Beethoven could have refuted it, which he had neglected to do, perhaps on account of being deaf, or mad, or both. And the truth was entirely different, you see, and much plainer. It was not the idea of fate that had inspired him, nor was it Morse code, rather it was the song of a yellow-hammer bird, which he had heard—penetrating, somehow, the heavy silence in his ears—while walking in Prater park in Vienna, which had been free to the public thanks to a declaration, a regal decree dating back to 1766 by Emperor Joseph II. And to make a short story long, the conclusion—dit-dit-dit-dah!—the conclusion is this: when two ideas compete for popular attention, fate would always get the upper hand, especially when its rival is merely a songbird.