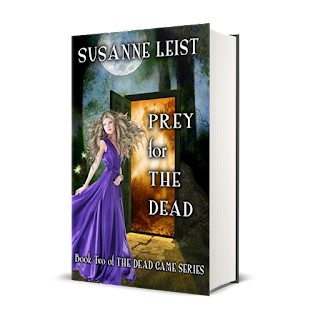 Book Two of The Dead Game Series
A long-buried secret emerges from the ruins of End House…
Five years of peace have ended for the residents of Oasis. Evil returns to wreak havoc on the seaside resort.
Linda Bennett’s dreams of happiness have always eluded her. Five years ago, she moved to Florida from New York to escape heartache. The Dead vampires and their leader, Wolf, had ruined any hopes of peace for her and her friends. Surrounded by vampires and hybrids—human vampires, Linda finds solace in her bookstore. Then one morning, the lights go out, and an explosion rocks her shop and any future dreams for a happy ending.
Have The Dead and Wolf returned to exact their revenge on Oasis?
Linda and her close friends—Shana, David, and Louise—race to where lightning converges on an isolated spot behind the town. A sinkhole replaces End House’s former site. Around the hole stand The Watchers—the vampire police, the group of five hybrids, and The Elders—the local vampire leaders. Echoing from inside the dark pit are the voices of Father John, the vampire hunter, and Abe, the head Watcher. Trapped with them in the tunnels below, Oasis is the magical door that controls time.
From this moment, Linda and Shana become embroiled in the twisted escapades of Todd, Sheriff Sam, and The Elders as they search for The Dead at an exclusive club in Disney World. Death and mayhem follow their every step. A masquerade ball and a romp through the tunnels lead to a showdown in the swamps of southern Florida.
Can Linda choose between Gregg and Todd—the two hybrids who compete for her heart and are at war on opposing sides? Will she find her happy ending?
Will Oasis survive the battle between good and evil?

Buy this book now at:

Amazon l Amazon UK l Barnes and Noble
Excerpt:
Linda stood alone by the reception desk. Foreboding raced through her. Gregg’s warnings might be right. Something is happening now. And I know where to check.
She hurried along the narrow hallway to the library. A large group of vampires had to be somewhere. They were night owls. Linda knocked with her knuckles on the door, camouflaged in the wood. It slid open. She stepped into the dark room.
Linda inhaled a metallic odor. She ran her fingers along the right wall. On the smooth paneling, she located the light switch and flipped it.
The chandeliers and the Tiffany lamps on the tables lit the room with a hazy glow. Instead of a meeting, Linda found the balconies and floors coated in red. Bodies slumped across desks, many with stakes in their backs, more without heads. From the galleries swayed dripping bodies, adding to the river of blood flowing through the central aisle between the tables.
My god! This can’t be happening. Linda opened her mouth, but no sound came out. She fell against the wall, shuddering, covering her eyes with shaking fingers.
A drop hit her shoulder. With dread growing in her stomach, Linda lifted her face. A body hung from the chandelier—a headless form—still wearing its shirt and pants, now saturated with blood. She jumped back, her foot slipping into a thick puddle. Jagged pieces of bones brushed against her ankle. Bile rose in her throat. She scrambled away, but her leg stuck on a severed arm. Shaking her leg free, she banged into a wall. Her knees gave way, and she sunk to the ground, the bloody massacre spread before in its extreme gruesomeness, and screamed until her throat turned hoarse.
Dead bodies covered the floors and tables and hung from balconies and chandeliers. Linda gave a violent shiver. So many of them. Who did this? The Dead? The Elders? Todd? No. I can’t believe Todd did this. Help me. She shut her eyes.
Dragging herself upright, Linda searched the wall for the mechanism to open the door. She found it. The door clicked open. Fresh air replaced the metallic smell assaulting her senses. Linda ran from the room.

Posted by Susanne Leist at 2:17 PM