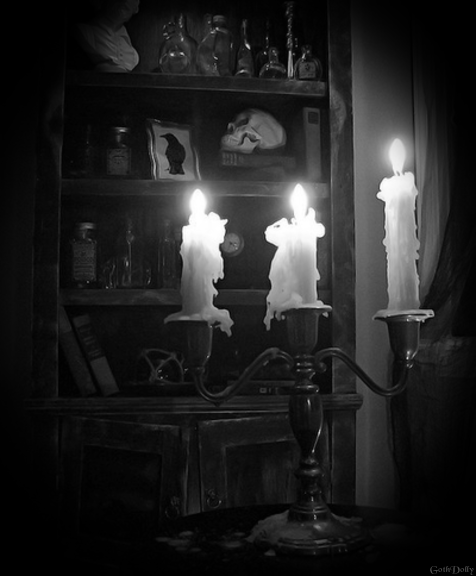 Just when Linda and her friends thought they were safe, they were hit once again by unknown, dark forces.

They stepped outside into the sun. The town turned dark with hovering black clouds. The mountain rumbled and shook. Trees began to sway with their frightened leaves flying from their trembling branches. Loud blasts of thunder surrounded them from all sides. The sky above End House lit up with bright flashes of red and orange lights. In the opposite direction, above the dark mansion, sizzling lightning bolts were streaking across the blackened sky.
David said, “What now?” They made a mad dash to their cars.
Todd said, “We will meet at the mansion. That’s where the eye of the storm is focused.”
Their cars raced past the estates, speeding along the dirt path by the bed and breakfast, spewing gravel and dirt everywhere. The gingerbread house was lit up. People were streaming out the front door. Linda didn’t recognize any of them, but suspected that they were Abe and Anna’s missing children.
They drove up to the mansion, and the storm intensified even further until the entire sky was lit up with lights as bright and colorful as a fireworks display. At each of the many windows, faces could be seen grinning at them. They didn’t appear to be human faces. Their elongated, white faces were stretched out like Silly Putty. Their oversized green eyes were glowing in the darkness behind each open window.
Abe and his people caught up to them at the mansion. They stood behind their group as they watched the bizarre scene before them. They wore long overcoats over their dark clothes. Linda was intrigued to see what they had on beneath their coats. Maybe they were armed with special weapons.
“Those are the vampires that we must now extinguish,” Abe said in a loud voice above the roaring storm.
“How are we going to accomplish this feat?” Linda asked, skeptical of him and his family. Just what they needed now—a new gang of players thrown into the old, uncertain mix.
“I’m waiting for the priest, and then all will be explained.”
Linda wasn’t satisfied with that answer, but kept silent and waited with the others.
Father John arrived soon after. Abe walked over to him and they spoke for a while.
Linda said to Shana, “I bet that’s where Natalie and Maxell hung out: in the deserted mansion with the demonic shadows that stalked us in town.”
“Imagine. A whole vampires’ nest right inside our own town. If I’d known about this, I would never have slept at night.”

Posted by Susanne Leist at 6:27 PM